How I deal with skeptics 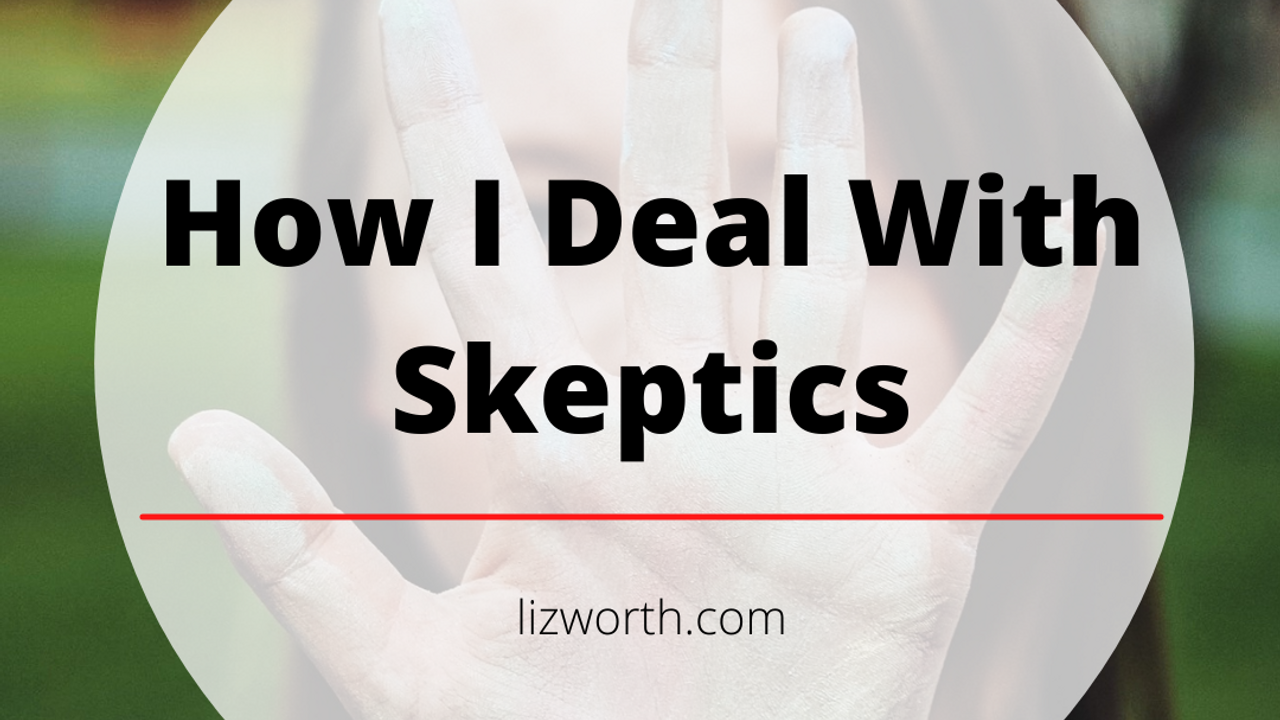 For simplicity’s sake, I am using “spirituality” throughout this post as an umbrella term to encompass a range of practices, tarot to astrology to religion and everything in between.

Someone asked me recently, “How do you deal with skeptics?”

I don’t, as in: I don’t argue with them, or try to change their minds.

But I also don’t let it get to me. I don’t own tarot, or other spiritual pursuits. I can defend my beliefs, but there is no threat to them just because someone doesn’t participate in the same things I do.

I also remind myself that skepticism is a belief system itself, too. So no matter where we are coming from, we must be mindful to cultivate acceptance of other viewpoints.

Meaning that I don’t expect everyone to think the way I do. Each of us has the right to choose the path and perspective that feels best.

Skepticism has a spectrum and comes in many forms. It’s not always an all-or-nothing mindset rooted in science vs. spirit.

Even spiritual people are skeptical. They choose what they subscribe to.

And in the right doses, skepticism can actually be healthy.

It helps us to make good judgment calls when we are seeking out anything from spiritual advice to a new car.

If it sounds too good to be true, it usually is. It is one thing to be open-minded, it is another to be gullible. The latter can be dangerous, because it skews your boundaries and sets you up for betrayal.

But like anything, moderation is key. Too much skepticism can create narrow-mindedness, suspicion, and snap judgements.

It can also lead to misinformation. For example, most people know astrology exists. They’ve probably used it on some level, like reading about their sun sign. But they don’t necessarily know how it works, or what it really is underneath the mainstream surface.

And if they don’t really believe in it, then why would they be compelled to research it further?

Which is why, if I feel I’m put on the defensive by a skeptic about tarot, I might ask, “What do you know about card reading?”

And then I listen to what they say.

Sometimes, the opinions I’ve heard are based on outdated assumptions and misconceptions.

Even though some skeptics say they pride themselves on rational, intellectual thought, it’s always interesting to me how often, at least in my experience, they base their conclusions on opinion rather than education.

It’s not my job to run around making sure everyone on the planet understands tarot. The information is there for the taking. All anyone has to do is start to look for it.

But they need to be the ones to take that step.

Other times, I find that conversations about skepticism uncover a lot of disappointment, hurt, or fear.

Some people have bad experiences on spiritual paths – whether it’s through a scamming psychic or corrupt church – and become disillusioned.

I have met people who don’t believe in anything because of a prayer that went unanswered when they were children.

“I really don’t want to believe we don’t have free will,” a friend confided one day, when she was asking me if tarot predicts the future.

She told me the idea made her nervous because she felt that tarot would lead to a loss of control over her life. Her way of controlling that fear was to shut out practices like tarot altogether.

But there is another side to skepticism that strikes me purely as spiritual laziness.

This comes up when people want to see proof right away. Proof that prayer works, that ghosts are real, that dreams have meaning.

They don’t understand that spirituality is an act faith, and faith takes practice. Spirituality – whether it’s expressed through divination, astrology, meditation, Christianity, or anything in between – is about longevity and sustained belief, not instant gratification.

And that act of faith is, in my opinion, 90% of the point of spirituality. It is all about accepting something that you can’t always see, but you trust is there.

I see this when skeptics want me to do the work for them. They seem to want me to convince them otherwise. To prove them wrong and change their minds by taking them from non-believers into converts.

But I can’t create trust for you. I can’t give you faith in something. You have to do that for yourself.

Which is why I have always maintained that I am not responsible for anyone else’s belief systems.

It’s the same for those who are looking for tangible or scientific proof that spiritual forces exist.

But these are not things you find in a lab.

Science can’t give you spirituality – you have to create it yourself, and it often starts from within.

When we get too linear in our thinking, we cut ourselves off from our full expression. If science and rationality were to rule everything, then you would have to ask yourself:

Is love really just a chemical reaction, as science has suggested?

Is the attachment a parent has for their child just a symptom of the brain rewiring itself after childbirth?

Do we have souls, or are we just the extent of our physical selves?

These can be very uncomfortable questions, even for those who exclusively choose science over spirituality.

(Also: Why do some people feel that it has to be a choice between one or the other? Spirituality and science are both important in our world. But that’s a whole other topic…))

I do believe in souls, and in love, and in real connection. And I believe that those are just a few of the many things that make us spiritual beings.

Which brings me back to my original question: How do I deal with skeptics?

I don’t take it on as my own personal battle.
I don’t get worked up about it.
I don’t expect everyone to think the way I do.
I am as compassionate and respectful as the conversation requires.

I also often say, “Just because you don’t believe in something doesn’t mean it’s not real.”

It’s easy for me to brush skepticism away because spirituality it brings me such joy.

I used to work at a crystal store. One day, an older woman came in to buy some stones and angel figurines.

As I was cashing her out, she told me she has always felt she had angels around her.

And isn’t that the point – to believe?

Through my beliefs, I find meaning, truth, and guidance in all that I live.

To me, what I believe in is real. And no one can change that.

It’s also why I can’t change anyone’s thinking, and don’t try to.

There is no lecture, book, or guru that can make you feel what I feel.

You just have to take a leap of faith to find it for yourself.