Is there such a thing as getting too many tarot readings? 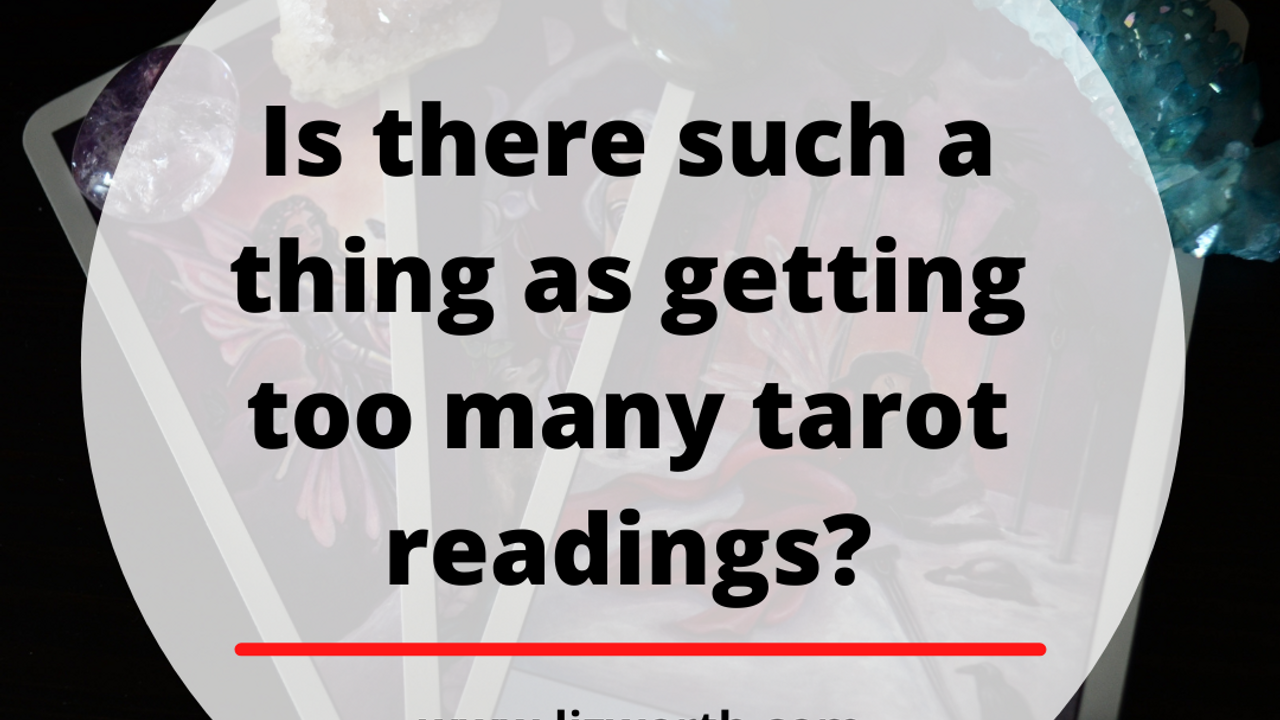 Messages need time to unfold. Life has to happen. And there can be many factors and influences involved in a situation.

Is it always easy to wait? No. But like anything else, tarot requires balance.

But what happens when tarot becomes a crutch – something you’re relying on so much that you’re afraid to make a move without consulting the cards first?

Or maybe it’s not just tarot. Astrology and other types of divination or rituals can have the same effect.

At what point does a tool or spiritual practice become superstition, or even dependency?

Finding a balance here isn’t always easy. If tarot is so accurate and useful, why not use it all the time?

I wouldn’t say it’s common that someone develops a dependency on tarot, but it does happen.

This is one reason why many tarot readers have guidelines and policies for their clients about how frequently they can book a reading: Some readers recommend coming back after six months have passed, for example.

But those are not hard and fast rules, and are set individually by independent practitioners – all of whom may have their own rhyme and reason for setting up their work a certain way.

There can also be differences between frequency of use and dependency. I’ve had clients who’ve gone through periods where they consulted with me quite often, but many of the sessions involved different questions and situations. It just happened that there was a lot going on, a lot to talk about, and they needed the extra hours.

I don’t get concerned as much when someone is using tarot as a tool to move forward, even if it’s frequent, if they are indeed finding it useful and helpful.

But what do you do when someone becomes fearful of making the wrong decision without tarot’s input?

What happens when someone feels paralyzed in their life, waiting for their next tarot appointment before they can make a change, or address a conflict?

Or if it becomes impossible to do anything without pulling a card first? (Or consulting an astrology chart, or pulling an oracle card, or whatever else is on the go…)

I know I’ve said this before, but it bears repeating: Tarot isn’t meant to replace our own decision-making.

I think tarot is a great device when we need an additional perspective, or when we feel blocked or confused about something and need an alternate opinion.

But it’s not intended to be a fatalistic tell-all tool that needs to consulted at every turn. Instead, it can actually help us make better decisions in the long run, if we allow ourselves to acknowledge the times when tarot confirms or validates a hunch we already have about something.

It’s not unusual for people to grow out of tarot in some ways, finding that they need it less as time goes on because they’ve learned what they needed to from it and gained confidence in themselves as a result.

But for anyone struggling to get there, and finding instead that they are entangled in tarot or similar tools, it’s important to remember that tarot doesn’t always have the final word.

And it’s also not always the best tool for all situations.

Sometimes the answer to a question isn’t just about what the cards have to say: It’s also about what you want, need, or have to do in order to move forward.

If tarot is starting to make someone lose sight of what their own feelings, thoughts, or desires are, then it might be time to take a break from divination. Tarot as a practice shouldn’t erode your confidence, intuition, or self-trust.

So what can someone do to work through a tarot dependency?

Sit with what it is you’re really afraid of. One thing I’ve learned as a tarot reader is that a major reason people gravitate towards divination is because they struggle with decision-making.

There can be many roots to that, such as fear of missing out or making the wrong choice. Another reason decision-making can feel scary is if there is a fear of failure or regret, or a strive towards perfectionism and getting it “right” the first time around.

Reflect on other times you’ve had to make decisions without anyone else’s advice or input. What happened? How did you do it? Reconnect to times when you made decisions – the right decisions – without consulting cards or other tools first.

Tune in to what you want. So often, I sit with querents who know what they want to do with their lives, and yet they want confirmation or permission from a tarot reading first. Even when the cards tell them to go for their dreams, they still hesitate out of fear that something might not work out.

If that’s familiar to you, start small. Make a choice each day to do something that brings joy to you. Build up to making bigger choices by gradually doing more of what you want, and less of what you don’t.

Remember that your life is not set in stone. You have free will.  won’t always make the perfect decision – none of us do. And sometimes there are no clear or perfect choices, anyway. Tarot is there to help along the way, but it’s not a clear cut roadmap to your day-to-day life.

Your personal experiences are yours to shape. There might be times when you’re at a crossroads or feel overwhelmed by choice, but the more you allow yourself to choose what feels right, rather than rely on external validation or permission to choose, the more trust you will build with yourself.

Know someone who might find these tips useful? Please feel free to pass them on.