What Happens When Politics and Spirituality Collide 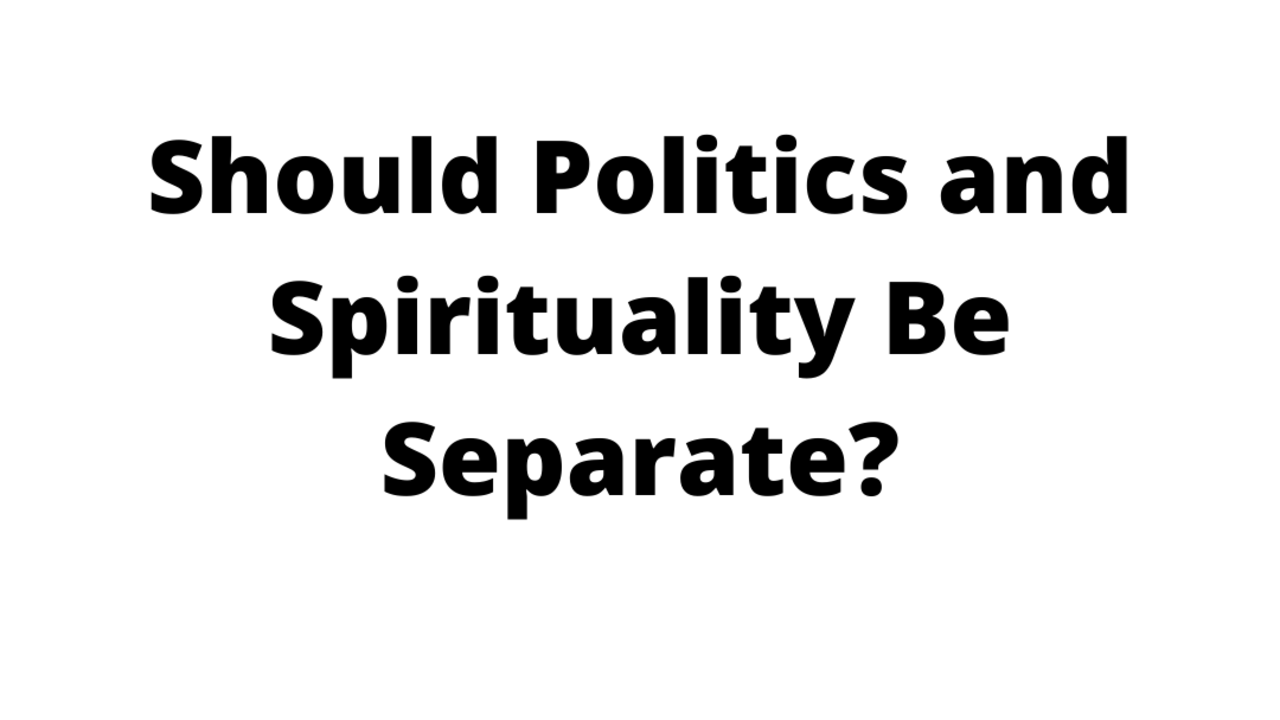 Should spiritual leaders “get political”?

Should your favourite tarot reader, astrologer, or witch share their political views on their platforms?

Some people believe the two should be kept separate.

But it’s not always so easy to figure out where the lines can be drawn – and whether they should be drawn in the first place.

I mean, what is considered “political” anyway?

I’m not just talking about elections and political parties – that’s just one part of it.

Sometimes I think that everything is political. Maybe that comes from living in a woman’s body: From day one, my appearance, my choices, and my lifestyle have been politicized no matter what I do.

But then I challenge my own belief on that when I encounter an opinion on what is political that I hadn’t considered before. Like what we’ve seen this year in regards to the pandemic.

Maybe it’s that gray area of what political really means that gets some people’s backs up. Sometimes I’ve been surprised by responses I’ve received by people who say they would prefer I didn’t “get political,” even when I thought I was talking about something quite neutral.

I know I’m not the only one who’s experienced this because I’ve seen these comments on my peers’ work, too.

But I have to wonder: Why?

Why is there is an expectation that a tarot reader, astrologer or other type of spiritual leader shouldn’t “get political”?

Because personally, I don’t see much separation between the two.

Just as I see politics in many things, I also see spirituality everywhere, too.

Every single experience you have in your lifetime can be put through a spiritual lens. What I mean is that everything can be…

A big or small lesson…

A point of personal reflection…

An opportunity for growth…

An opportunity to make a different choice...

An opportunity to practice compassion, patience, or forgiveness…

What I’m getting at is that I can’t just turn off my spiritual filter.

And I can’t turn off politics, either.

The society I live in, the services available to me, and the experiences I’ve had throughout my life can all be traced back to political decisions somewhere along the way.

When you start to think about it, even the most mundane details of your life are impacted by something political:

The clothes you wear. The roads you take to work. The services you and your family access.

Even what types of activities we engage in, and how they happen, is political. Alcohol sales, bar hours, and zoning regulations are all political.

In some parts of the world, including North America, practicing tarot is not even legal. If that’s not political, then what is it?

Even though politics and spirituality are everywhere, there is an expectation that those of us who work in spiritual capacities, including diviners like myself, to “stick to the script” when it comes to the messages we deliver – the script being one that focuses only on generic, inspirational posts and uplifting readings or predictions.

Many people turn to divination and spirituality as a part of their daily routine. Reading horoscopes, tuning into a tarot YouTube channel or checking out an oracle card reader’s daily draw on Instagram can absolutely be a source of guidance and inspiration.

But I don’t believe it is a reasonable expectation that all spiritual leader or content creators are here to provide an escape from reality.

And it isn’t quite so easy to say that spirituality and politics should even be separate to begin with.

The spiritualist movement of the late 1800s gave women voices and platforms, an access to power that was often reserved for men. It was an unexpected gateway for women to express themselves, even if it was under the guise of “spirit.”

Astrology is as much a study of the history of the world as it is an individualized experience. How could you talk about the influence of a major astrological transit without comparing it to what happened economically and politically in previous decades?

History helps us to understand today’s planetary motions. Without measuring astrology against past political climates, we might not know the energies of the planets as well as we do today.

Tarot’s most popular deck, the Rider Waite Smith, was illustrated by Pamela Colman Smith who supported women’s suffrage. Smith took inspiration for some of the figures in the RWS deck from her own friendships with other suffragettes.

The RWS deck is arguably the most influential tarot deck out there, having inspired countless modern decks since its original publication in 1909. To say that tarot and politics should not meet is to ignore the feminist roots that are embedded in the images that have launched modern-day decks.

Tarot cards of all kinds hold hundreds of conversations within a single image.

That’s why these cards are so powerful: One minute a reader is working with someone who wants to know when they will find love. The next minute, they’re reading for a community activist who needs guidance on lobbying for change.

You will always find a crossover with spiritual work and politics because spirituality – including divination – is for everyone. And politics affect us all, whether we want to participate in them or not.

But that’s not all that my work is about, and I know the same goes for many of my peers. We don’t use our tools as forms of escapism because that would be out of line with the communities we serve.

The people who seek out readings from me can’t opt-out of their lives. I can’t tune out the news because my clients and students bring those discussions into the work we do together.

And I didn’t come here to opt-out, anyway. I came to show up.

And so my work will always crossover into current events, politics, and the issues at large. Because what’s going on in the world is influencing me much more than any spirit guide or intuitive nudge ever will.

I spend as much time keeping up with the news as I do reading books about magic and cartomancy.

Any spiritual worker worth their salt would be remiss if they did not have a good read on what was going on in the world at any given moment.

In fact, I have learned so many important lessons about the state of the world because of my spiritual path. This space has taught me so much about cultural appropriation, environmentalism, colonialism, and more – and I continue to learn every day.

How can we expect to accomplish what so many alternative, intuitive, and earth-based spiritual practices aim to achieve if we regularly tune out? If we want a better world, we must understand the challenges that we face.

If we are to draw from the cliché that everything is a connected – a cliché that gets a lot of mileage in tarot, astrology, paganism, and more – then we have to accept that politics are part of our lives.

To request that a spiritual leader stay silent on an issue that is important to their community is to ask them not to show up for work that day.

There can be room for fun and play in spirituality, but spirituality’s ultimate purpose is not to support a desire for escape or distraction.

A spiritual worker shouldn’t have to apologize for “getting political” just because it’s expected that we’re only good for card of the day draws and inspirational memes.

Spirituality’s purpose is to guide us, no matter how challenge the terrain may be, and help us to find our voices when we need them most.