Watching for signs? Tips on working with omens 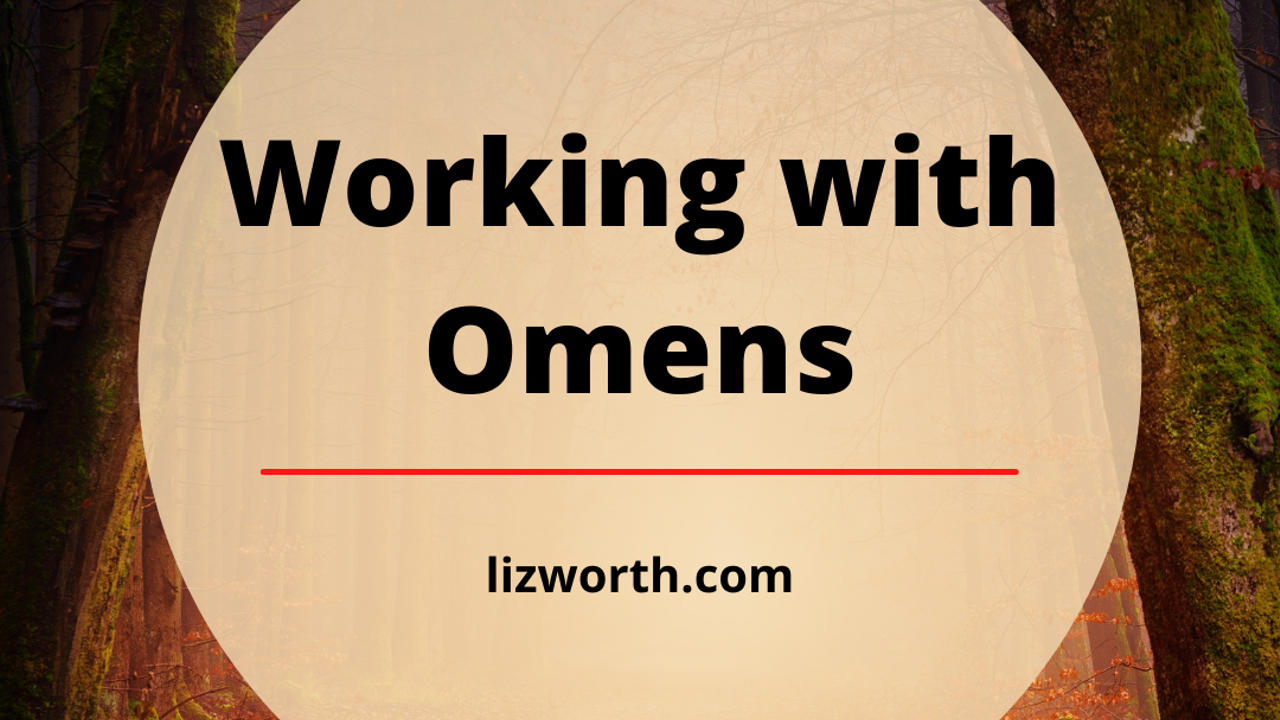 Do you ever ask for signs?

One of the most powerful omens came to me just last year.

I was doing some work with spirit guides, through a course I had purchased with a shamanic healer. A lot of the work involved meditation, and one of the first assignments was to ask your guides to confirm their presence.

After that morning’s meditation, I did my homework and put my question out there, not knowing what might come about.

Later that day, I decided to go for a walk. It was early spring, and the weather was just starting to get good after a long, hard winter.

I had no destination in mind. I ended up walking east, away from my downtown apartment towards an old residential neighbourhood. There, the streets are quiet, and some of the roads end with a great view overlooking the city.

I turned one corner after the other, simply enjoying the sun on my face. As I crossed the street, something flat and shiny caught my eye. At first, I thought it was a quarter. As I got closer, I saw it wasn’t currency at all, but a coin imprinted with an angel.

On the other side was a message: “Always with you.”

What had taken me out on that random, winding walk? Out of everywhere I could have gone in this vast city, out of the myriad objects that one of the millions of people in Toronto could have dropped, I happened to follow an unplanned path to find this coin.

I had asked for a sign that day, and I got it.

Signs aren’t always so obvious, though. Sometimes they come through in much more subtle ways, hitting us intuitively rather than manifesting as external omens.

But they are important to watch for. They can deliver the confirmation we need, or act as warning signs of trouble up ahead.

Of course, much like learning to trust your intuition, watching for signs – and listening to them – involves a lot of trial and error. Usually, it takes a few instances of ignoring the omens around you to realize later that you should have paid closer attention.

So how can you tell if it’s actually a sign or not? The first rule I follow is whether it feels significant or not, and whether I even need the confirmation it’s giving me.

For example, I watch for signs a lot when I am starting to work on a new book. Because writing long form is such a massive undertaking, one that requires my long-term commitment, it’s important to me to know whether I am following the right idea or not.

When I was working on my first book, an oral history of punk in Toronto that required a lot of research and interviews, I started seeing signs everywhere. Like the day my mom started nagging me to go through a box of stuff I had stashed under the crawl space in the basement. The box had sat there for years, and my mom had never mentioned it before.

I opened it up, only to find a magazine from six years previous that featured a story with someone I had been trying to set up an interview with.

I took it as a sign that I was working on the right project at the right time. It was a small thing, but to me it felt important.

And that’s a guideline I recommend following with everything you do in your life. There will always be someone who is skeptical, someone who tries to dismiss an omen or message that you feel is important. But whether it shows up for you in the everyday, or through an intuitive reading or conversation with a friend, if it has weight to you, then follow your feelings on it.

Faith and trust play a big part in everything we do. You need them to develop your intuition. You need them for decision making. And you need them in order to believe that the universe is helping to guide you along the way.

A major sign I ignored for a long time was the feeling of invisibility. We often think of signs as something that will confirm or encourage a direction we want to go in. But signs can manifest as challenges, too.

I spent many years working in the non-profit industry, and it was a place where I never felt completely comfortable. Deep down, I knew I wasn’t on the right path, even though I could rationalize my way into work every morning.

But a major sign that I ignored in the eight years I spent in that industry was the feeling of being invisible. It followed me from job to job.

Whenever I was in a meeting with someone from outside the office, they would click with everybody else but me. And if we met again for future work, they often wouldn’t even remember that we’d met before. They would talk to everyone else at the table but me, as though I didn’t need to be there at all.

Maybe it was because I shouldn’t have been there in the first place.

I also found that colleagues would have trouble remembering what my job actually entailed. Again and again, I had to remind people what I did, and what I was responsible for. They would confuse me with other people, or ignore me altogether.

But when I left? The shift in energy was so distinct that I remember it actually surprised me for a while. When I started focusing more again on my writing, tarot, and creative coaching, I would meet with collaborators and peers and find that they were…actually listening to me. And paying attention. And valuing what I had to say.

And I had realized it had been so long since I’d had that feeling that I felt guilty for having allowed myself to feel slighted for so long.

This feeling of invisibility can extend to all types of relationships, not just working ones. Feeling invisible with friends, lovers, and even family can all be a sign that something needs to shift.

We can’t always cut people out of our lives completely, but we can take this as a cue to change how much we give, what we expect, and how we interact with them.

A lack of synchronicity can also be a sign. Sometimes, the absence of omens altogether can tell you that you’re not on the right path.

Have you ever experienced something like this? Everything can seem to be going along okay, but that’s the problem – it’s just okay.

Deep down, you feel like something is off, but there are no major blocks or obstacles in the way. You’re just not sure if you’re where you need to be.

When things feel flat, and you don’t feel like you’re in flow with what you’re doing, the universe can hold back on the signs and signals it gives. Because often, those signs show up to say you’re in the right place, and a lack of them – paired with an uneasy feeling – can be an omen altogether.

But what happens if you ask for a sign and nothing comes? What are you supposed to do, then?

I’ve been there. It’s happened to me:

Praying for a sign that would tell me I should quit a job. Asking for a signal that will tell me everything will work out. Feeling confused or unclear about what to do with myself and asking for some kind of direction…

And yes, I’ve felt let down at times when no answers came back to me. Because it only made me feel more stuck, more lost, and more alone than I already did.

But what I came to realize when you don’t get the signs you need is that sometimes, the universe pushes you to figure this stuff out on your own.

And sometimes, the bigger the lessons you’re living through, the harder the homework.

At some point, you need to trust in what you know is right for you: Leaving a bad situation. Making a decision you’ve been putting off. Starting to work towards a goal.

Usually, we know what we need to do, even (especially) with the stuff that scares us the most. But moving through those decisions are also the moments that become pivotal turning points. They are the times when do get to learn how powerful we are, because that’s when we learn to trust ourselves.

And developing that trust is what we are all meant to do. It’s a lesson that every one of us has to live through, and it gets tested again and again.

And when we’re in exam time, the universe doesn’t always like to offer cheat sheets.

Not everything is a sign. This is especially important to remember when you start to work towards a goal.

As soon as the first thing goes wrong – because something always will – it’s easy to question whether it’s a sign that things won’t work out at all.

I remember having to deal with this when I was starting out as a freelance journalist. I was in my early 20s, and the idea of the constant freelance hustle was as daunting as it was exciting.

I really wanted to work myself to a point where I had some steady gigs, and one of my dream scenarios was to have my own column.

I’d been writing for a major daily paper for about a year when the editor offered me a column. “This is it!” I thought. “This is finally coming together.”

Except it didn’t. The contract never arrived, and after asking about it a few times, I was finally told that the budget didn’t get approved. Not long after, that paper went through a major overhaul, and the section I would have been writing for was scrapped altogether.

It was a major bummer. For a while, it did make me question whether anything would go as I had hoped with my freelance career. It’s hard when a setback like that comes your way, especially if you’re building something for yourself where so much of your success feels like it’s outside of your control, or where you continuously put yourself in the path of rejection.

But remember that if there is still a presence of opportunity, if there are other things that are telling you to keep going – even if you need to pull from your own sense of hope and optimism to find that message – then that can be enough.

And often, just when you start to question what you’re doing, or you feel like you’re ready to give up, is when something appears to tell you to keep going, even if it’s just for a little longer.

Because roadblocks will always come up. But learning to pay attention to how you feel in a situation is what will help guide you more than anything, and it will help you to read the signs and signals that show up on your road ahead.

I hope this helps you find the signs that are helping to lead the way.