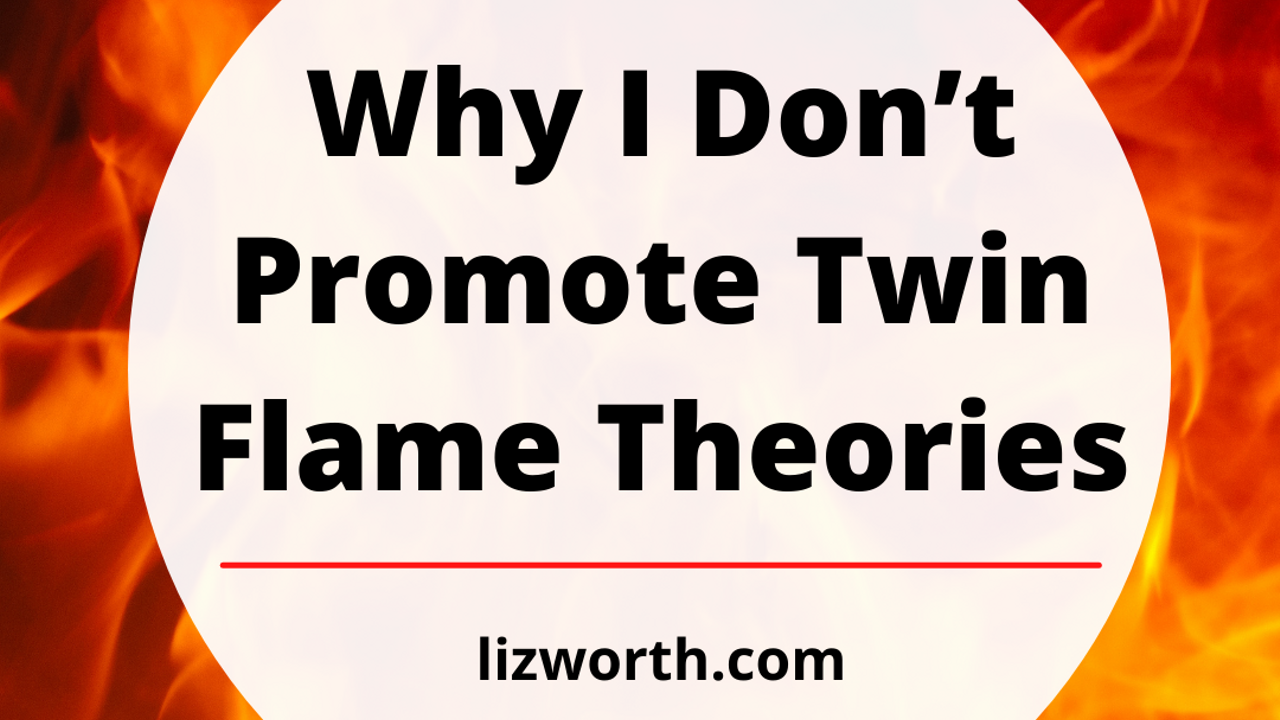 Twin Flames are a divisive topic.

But first: What are twin flames, anyway?

The idea suggests that twin flames come from a single soul that split into two. In this Vanity Fair article, the researcher was only able to trace the term to 1886.

It sounds similar to soulmates, but the beliefs around twin flames seem to drive more conflict – or even encourage it within relationships as a pathway to spiritual growth. Turmoil, pain, and on-again-off-again affection are considered signatures to the twin flame journey.

There are plenty of twin flame gurus, cults, communities, and coaches out there to help guide people to their twin flames, and through the subsequent ups and downs of these relationships.

And it’s a lucrative corner of the spiritual industry.

I don’t want to get too far into the explanation of twin flames as that’s not the purpose of this piece, so I’ll stop there with the intention of expanding on these thoughts more in the future.

What I wanted to talk about today is why you won’t hear me talk about twin flames as a relationship model.

Because I don’t believe in twin flames.

Many clients assume that because I read tarot, I probably believe in any and all New Age concepts they’ve believe in.

This isn’t about the validity of a belief in general – though there are a lot of arguments against twin flames – so much as it is about my reluctance to participate in it.

Tarot readers don’t have to subscribe to every spiritual concept out there. It’s not a rule.

I don’t care if my clients believe in twin flames – and some of them do. And that’s cool. I am happy to talk about their relationships and help them through that as I can, as long as they’re okay knowing I don’t subscribe to the theory.

But it’s never a concept I’m going to push on someone else independently of that, because it’s not part of my framework.

I’m not educated enough on it to promote the idea.

But I’m also not sold on what I do know about twin flames already.

Critics and skeptics of the twin flame theory have expressed concern that it promotes toxic relationships and codependency.

And based on what I’ve heard first-hand from clients and peers who do believe in twin flames, I tend to  agree.

While I like the idea of romance and have always had a soft spot for concepts like soulmates, and while I’m sure there are people out there in awesome twin flame relationships, I’m also sensitive to the downside of these convictions.

Because truthfully, I hear a lot more about problematic twin flames than successful ones.

And when two people who are really, really wrong for each other become convinced they are destined to be together in this lifetime, they can both end up getting stuck in unhealthy patterns together.

Or when one person believes that someone is their soulmate or twin flame, but those feelings are not reciprocated, things can get really messy sometimes.

As someone who’s been stalked before by another person who absolutely, without a doubt believed he and I were meant for each other, I can tell you firsthand that it gets scary.

And some twin flame relationships have resulted in stalking and obsession.

When relationships turn obsessive, you need to put spirituality aside and look at the common sense of the situation.

And unfortunately, what I see a lot of the time in discussions about twin flames is the insistence that it’s just part of the spiritual journey.

As soon as consent, safety, and respect go out the window, I have a hard time seeing the spiritual value there – and spiritual growth is not an excuse for bad behaviour.

We can learn a lot from any relationship, but it doesn’t have to go to extremes in the process. If someone says they are not into you, they deserve to be heard, not conquered.

From what I’ve seen, twin flame relationships actually keep people trapped in bad relationships for a lot longer than they should be – because they believe they are meant to be together. And the idea of finding The One is so pervasive and intoxicating in our society that it can be blinding.

Alternately, I’ve also consulted with clients who carry shame and regret at feeling tethered to an ex they consider a twin flame – because they feel forever attached through the belief their souls are entwined.

But these are beliefs, not facts. Yet they have very real consequences on people’s emotions.

Open-mindedness towards different beliefs is important, but it can’t come at the expense of clients’ health or safety, or the people they claim to love.

Which is why I think it’s a theory that needs a lot of care and consideration, and one I prefer to distance myself from for now.

So here’s a takeaway for today: First, if you’re curious about twin flames, research all sides of it, not just the spiritual stuff. The article I linked to above is a great place to start.

Second, if you’re out there getting tarot or other types of readings, and your reader tells you about a twin flame in your life, check it with your own beliefs. If it’s a new concept to you, do your own research on it first - and remember that just because it’s in a reading doesn’t mean it has to become your reality.

Third, if you’re a tarot reader and you feel pressured to adopt certain beliefs to match the questions your clients are bringing you, hold tight.

We don’t all have to think the same or act the same, and that’s one of the things I teach in my Tarot Masterclass. If you want to learn how to navigate relationship readings from a responsible, ethical place – one that doesn’t require you sacrifice your integrity – join me here. Enrolment closes February 16.